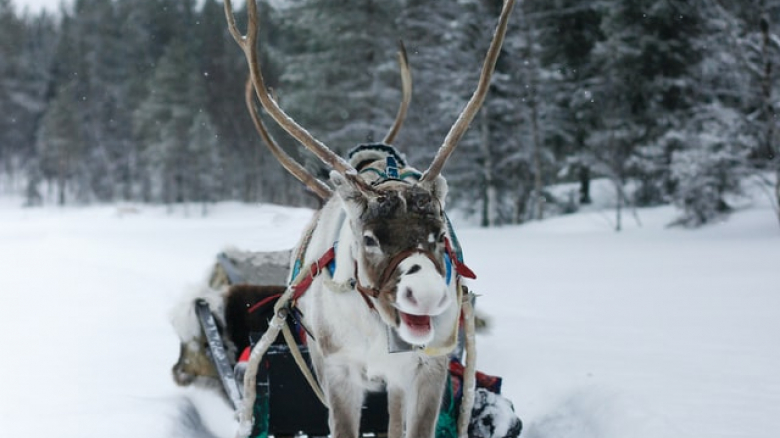 Ruby leaped out of bed and bounded down the stairs. The smell of cinnamon cakes greeted her. Today was the day she would find out if she made the cut for the Annual Reindeer Games.

Her ma hummed a jolly tune. “Eat up, your Pa is getting the sleigh ready.”

Ruby’s heart swelled with gratitude for her parents’ support. Quick as a snap, they went off to the stables.

She scanned every stable door until she found her name and let out a whoop of joy.

“Hello Blizzard, I’m Ruby Snowcarol and I’m going to be your partner!”

Blizzard gave her a haughty stare. “I don’t know, I was expecting someone rich who could glide my antlers with gold and-”

Ruby interrupted. “What kind of competition do you think this is?”

“A beauty pageant, of course.”

Ruby giggled. “No, you are going to be searching for a Christmas hat so you can win the honor of pulling Santa’s sleigh!”

Blizzard scoffed. “Who wants to compete for a chore?”

Ruby gasped, “Bringing Christmas gifts to the world is a privilege!”

Over the next few weeks, Ruby had to ask, beg and finally threaten to withhold all candy canes from Blizzard to make him train. She made him pull sleighs, hunt for hats, and learn the land around Tinseltown.

Finally, competition day arrived. Blizzard had transformed into a powerful sleigh pulling behemoth. Ruby was sure they would win.

Santa himself gave a speech about the true meaning of Christmas and the teams were off.

Blizzard raced through the forest and found the closet hat. Just as Ruby was about to grab it, someone else plucked it from her grasp.

“Come on, there are still nine hats.” Ruby stopped when she heard a mournful cry. She stepped off the sleigh to investigate.

Hidden in the snow, a little polar bear cub cried. “I can’t find my momma, Nanu!”

Blizzard’s eyes flashed, “Let’s ask Aput The Walrus if he has seen Nanu.”

Sadly, the walrus had not seen the momma polar bear recently.

“Have you asked Tulok The Snowy Owl?”

“Get on quick, Ruby, I’ll bring us to Tulok’s pine tree quicker than an elf can make a toy.”

Tulok hemmed and hawed, “But I’m quite hungry.”

Tulok gobbled up the candy and took flight. After a few minutes, he called out, “She’s at the ice floes.”

That was on the other side of the forest!

Blizzard nudged her shoulder. “Keep an eye out for hats.”

Ruby looked, but she didn’t see a scrap of red.

“Oh, you found my sweet darling cub!” The polar bear thanked them profusely.

Blizzard and Ruby bide a quick goodbye. They search high and low for one more Christmas hat. As the sun dawned on Tinseltown, they realized they had to head back home.

“There you are!” Santa laughed, “We were about to go searching.”

After hearing their tale, Santa proclaimed they were to be made members of the North Pole Rangers.

Ruby and Blizzard danced with joy, for the only thing more honorable than pulling Santa’s sleigh is protecting the North Pole.

I wrote this short story as a part of the Story Quest Academy Christmas Challenge!

I write science fiction and fantasy with a mad dash of mythology and history thrown in for good measure. I'm a professional copywriter, a homeschool graduate, and published short story author.... END_OF_DOCUMENT_TOKEN_TO_BE_REPLACED